Russian company Filtervak (Filtration and Vacuum Purification) is a manufacturer of equipment for filtration, dehydration and regeneration of hydrocarbons.

He is a partner of the Canadian Association Redragon Oil & Gas Systems Co., has access to cutting-edge hydrocarbon purification technologies

Our systems efficiently clean the fuel when pumped from tank to tank, and can automatically recycle fuel in storage tanks many times in one day.
They can also be used as the main pump for pumping between tanks.

High performance filter cartridges with filtration efficiency up to 99.9% at 5 microns (ISO 16889) are used in cleaning filters and coalescing separators.
Particle removal filter elements are available in denominations: 0.5 μm, 1 μm, 3 μm, 5 μm, 10 μm, 15 μm, 25 μm.
The elements of the coalescer / separator combination can reduce the concentration of water in the fuel from 0.5% to 0.005% in one pass.
Coalescing elements are available in denominations of 1 μm, with a water removal efficiency of 98.9% to 10 ppm.
The units are equipped with programmable controllers PLC for fully automatic operation.
Standard version using a NEMA 4 general purpose industrial control panel.
Explosion-proof design using a NEMA 7 control panel.
Performance of cleaning systems up to 400 m3 / h. It is possible to adjust the performance.
In addition, the units are equipped with a FES fuel regeneration system.
Power supply: 380-400 V / 3 / 50-60 Hz.. Climatic version -45 * C + 60 * C. Connection: ANSI flange, threaded or quick-release.
They are produced in the stationary version — installation on the skid, or in the mobile version — on the trailer.

The system for cleaning and degassing transformer oil under the influence of a deep vacuum. The system allows you to remove water and air dissolved in oil, as well as solid particles (a product of the natur

al wear of the transformer).
This vacuum equipment provides a sufficiently deep vacuum in the range 0.1 — 0.5 mbar, which is necessary for cleaning transformer oil.
They are produced in stationary and mobile versions, which allows oil to be cleaned in storage tanks, in production, directly on transformers.
System performance: from 550 l / h to 15000 l / h.
Characteristics after the first passage of oil through the purification system:
Water removal — from 0.005% to 0.0005% and lower in one pass in accordance with ASTM standard Method D — 1533
Gas removal — from completely saturated with gas (10-12% by volume) to containing less than 0.15% for the first pass in accordance with ASTM standard D-2945 method.
Particle removal — using a highly efficient filter element, 99.5% of particles with a size of 0.5 -3 microns and 99.9% of particles of 5 microns are removed.
Dielectric constant — dielectric constant will increase from 40 kV to a minimum of 70 kV in accordance with the standard

GENERAL DESCRIPTION
We offer a unique system for cleaning diesel fuel, gas oil and oils — CPS, which allows you to clean and restore product properties up to 300-500 times without replacing the filler in the filter columns before it needs to be replaced and disposed of.

The system is able to reduce the sulfur content in diesel fuel, gas oil, mineral oil by 3,000 ppm in one pass.
Sulfur content reduction is possible up to 300 ppm.
Productivity of installations is from 500 l / hour to 160 000 l / hour.
Column filler — super sorbing aluminosilicate regenerated heat-treated bauxite.

Compared to other methods for cleaning hydrocarbon products, such as acid, using our CPS system is cost-effective:
— The average cost of refined petroleum products is about 0.5 US cents per liter.
— Product losses will be less than 1%, compared with the acid treatment method, where losses are up to 8%.
— When developing a workable cycle, the filter media can be disposed of. The filler is disposed of in a normal landfill in the form of dry non-hazardous waste or can be burned in the furnaces of cement plants.
It will be environmentally friendly in comparison with wastes during acid processing, and its disposal will be inexpensive.


SYSTEM OPERATING PRINCIPLE
During the circulation of the nominal amount of the product to be cleaned, the filter media becomes progressively saturated, and its effectiveness decreases to the point where recovery is required. The recovery of the filler is carried out within the column shell. The recovery process is fully automated and allows the system to process the product, again and again using the same filler. In addition, after the filler is restored to its initial state, the performance of the column is increased and provides better results.
The CPS regeneration system is able to consistently clean and restore diesel fuel, oil, gas oil to the quality dictated by ASTM and IEEE standards.
To ensure a high degree of control and reliability, the regeneration system is controlled by a programmable logic controller (PLC) and connected to a computerized monitoring system that records and records all important operational parameters. The regeneration system is equipped with a dispatch operator.
In addition, the system is provided with additional equipment for testing by the operator of the product being cleaned. 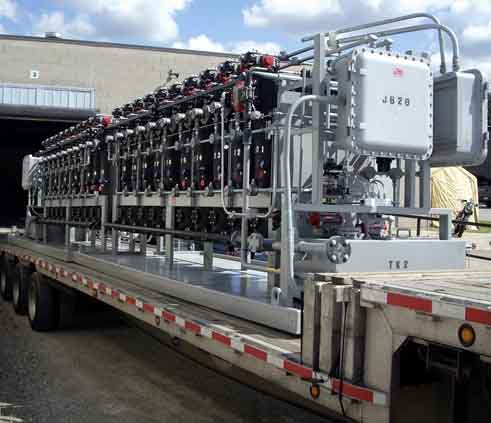 1. In small production of diesel fuel, gas oil to reduce
sulfur content in the product, where the use of hydrotreating is not cost-effective.
The system can be installed as the output stage of wiping film evaporators and vacuum columns.
The system is equally applicable to any type of refinery as the final stage of polishing on the product exit line.
After the product passes through the CPS system, it can be shipped to the consumer.

2. Bunkering with diesel fuel of ships.
Annex VI MARPOL 73/78 on the limitation of emissions of combustion products into the atmosphere. It defines the marine basins and SECA areas (SOx Emission Control Areas), where sulfur oxide emissions are strictly controlled and its content in marine fuels is set to no more than 0.1%.
All ships passing SECA zones are required to burn only fuel in these zones in which the sulfur content does not exceed 0.1%. MARPOL Annex VI, «Rules for the Prevention of Air Pollution from Ships», states that the burning of heavy fuel oil is not allowed while in port and in certain areas at sea. A shift to lighter fuels such as Marine Diesel Oil (MDO) or Marine Gas Oil (MGO) is required.
Gas oils with sulfur content up to 0.4% are used for the input processing product.
CPS system fuel output:
Light distillate fuel Distillate or Marine Diesel Oil (MDO), Marine Gas Oil (MGO) with a sulfur content of not more than 0.1%.
The system can be installed at the bunkering site in the port (terminal) or on the ship.
3. Purification and restoration of mineral oils.
Processing oil through CPS results in the formation of an oil that is resistant to oxidation for any measured period of time — this increased shelf life is an additional advantage of the CPS system.
In addition, the viscosity index does not deteriorate when processing oil
using the CPS system, so if group II oil is supplied to the CPS system, then the ability of the CPS to remove sulfur from 2000 ppm to <300 ppm in one pass gives the group II oil at the outlet. Virtual multi-pass operations can be performed in a single pass through the CPS system, since it allows switching from parallel to serial operation.
Low oil losses as proportion of waste created becomes feedstock for front-end refinery.
We has developed unique ProcRun mode of operation which provides a seamless switching between banks of columns, bringing the freshly reactivated bank in as the last in a continuously moving series operation, automatically dropping out the oldest bank for reactivation. This allows the plant owner to easily switch between different processing modes for each oil stream reclaimed through the front-end system. Integration with existing front-end systems and/or tank farms is easily achieved with the CPS.

SECURITY
-For safe operation (removal of harmful odors), the CPS system has an exhaust gas purification unit. The block consists of a filter (srubber with a bypass valve) using activated carbon (nominal 2 — 3 microns).
Depending on the environmental requirements for emissions at the installation site of the system, an oxidizer can additionally be installed in the system.
All CPS emissions are environmentally friendly.
-Dual gas scrubber allows for integration of exhaust into front-end refinery to minimise points of emission for environmental permit

Regeneration systems are designed and engineered to remove contaminants from transformer oil such as:

— Sulfur, paraffins, cycloparaffins, resins, sludge, mercaptans, surfactants, alcohols, aldehydes, ketones, olefins, neutral ethers,
aromatic oils, polar compounds, etc.
— able to neutralize the acidity of the product
— able to restore the color and smell of the original product
The regeneration system is able to consistently restore used transformer oil to ASTM and IEEE standards.
They are produced in two versions: mobile and stationary.
The TORS (M) mobile oil recovery system has been developed for local use to recover oil in excited or de-energized transformers at their place of work,
as well as for working from tank to tank. A mobile regeneration unit is located in the semitrailer van.

We offer a PCB series transformer oil purification system, which allows you to clean oil with a PCB content of 5000 rpm (0.5%)
reducing the level of PCBs in oil to undetectable (less than 2 ppm) and in combination with subsequent treatment with an adsorbent, it allows you to restore the oil to a new level and use it.
The PCB system operation process is based on the chemical reaction of PCB contaminated oil and alkali group metals (eutectic mixture of NaK1). In the process, the separation of the chlorine atom occurs — dechlorination of PCB contaminated oil.

The PCB Series Transformer Oil Cleaning System is available in both stationary and mobile versions. 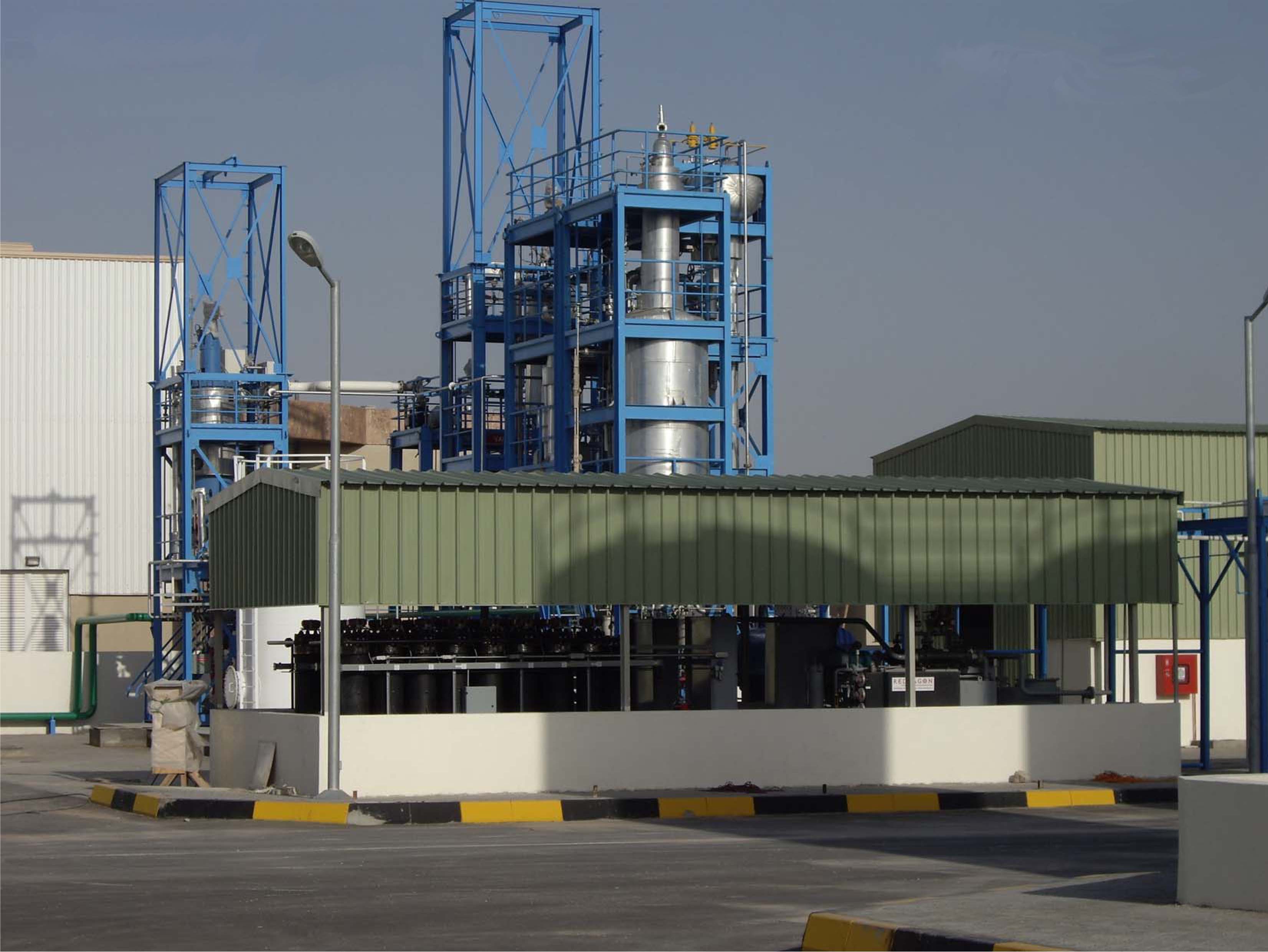 The recycling process is based on the WFE technology (thin film evaporator).
WFE technology allows you to increase the yield of marketable products up to 95–97% of used oil. 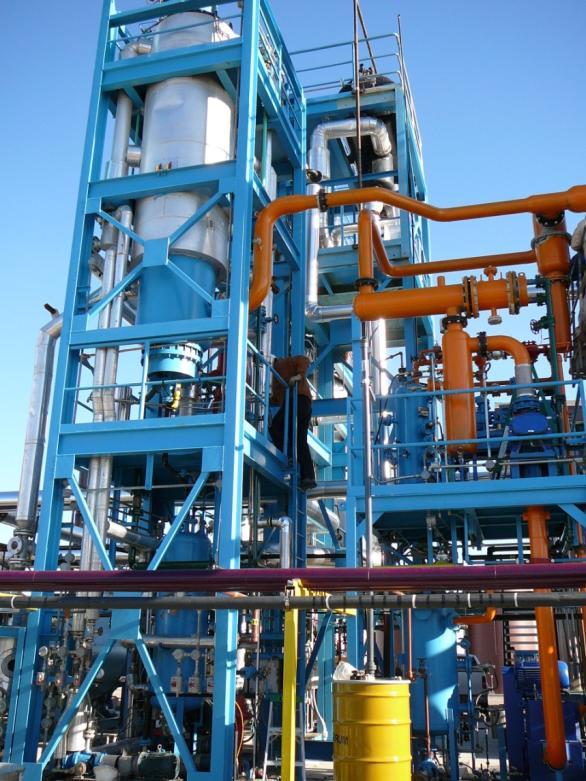 Process losses up to 1%.

The plant is implemented as a modular prefabricated design, fully assembled and ready for installation.

Do business with us!